Early history of the absinthe drink

Absinthe was first created in 1792 by Pierre Ordinaire, a French doctor living in Switzerland. His intention was to deliver the extract of the wormwood plant — which had long been known to have powerful healing effects — in a handy form.

The production of absinthe in a commercial sense began in 1797 when a man named Major Dubied bought the recipe from Dr. Ordinaire.  He began to manufacture the spirit with his son-in-law, Henri-Louis Pernod, in Val-de-Travers, Switzerland.

As the production of absinthe proved successful, Pernod in 1805, moved production to a larger facility across the border in Pontarlier, France. And then what began as a medicinal elixir, absinthe steadily grew into a global phenomenon.

In France, absinthe quickly caught on as the favorite drink of the aristocracy. In the 1850’s, the popularity of absinthe skyrocketed as the bohemian literary crowd embraced the “Green Fairy”. Many famous poets, writers and artists of the day routinely reached for a glass in search of inspiration. 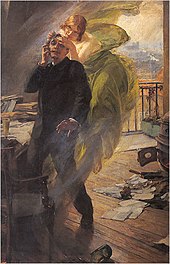 But what is the unusual taste of Absinthe? First absinthe tastes like anise, fennel, or licorice, depending on your frame of reference.  It has been used in cocktails for more than a hundred years.  However it is a very strong liquor which is usually very high in proof, clocking in at nearly 70 percent alcohol compared with 40 percent for most vodka, gin, and whiskey. It needs water to bring it down to drinking strength.

By the 1870’s, the absinthe craze was felt at all levels of the French society; just about everyone was drinking it. Days started with a glass of absinthe and ended with l’heure verte (the late-afternoon “green hour” ) when one or more glasses were drunk as an aperitif before supper.

By the end of the nineteenth century, France alone was gulping down over 2 million litres of the liquid per year.  Absinthe proved a great leveler in class-conscious Europe. Once beloved by the aristocracy, it moved through society with a freedom that was its own. At cafes from Paris to Prague, absinthe was drunk by artists and labourers, butchers and bankers. Astonishingly for the time, even genteel womenfolk freely enjoyed the       elaborate absinthe ritual in public.

But absinthe wasn’t just a European phenomenon. In 1878, over 7 million litres of the spirit were imported into the United States from Europe. New Orleans, the undisputed absinthe capital of America, even had its local brands such as Green Opal, Milky Way and Legendre. 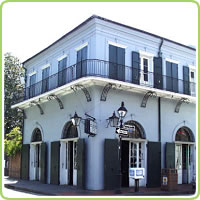 New Orleans embraced the Green Fairy with a particular affection. Here, absinthe took off in 1869, when the Aleix brothers opened a bar named the “Old Absinthe House” (pictured) at the corner of Bourbon and Bienville streets in the French district. The brothers hired Cayetano Ferrer, a bartender from the French Opera House, to run the bar.

In 1874, Ferrer took over the lease and renamed the bar the “Absinthe Room”. Ferrer served absinthe in the French style: marble fountains dripped cold water onto lumps of sugar suspended on perforated spoons over glasses of absinthe until the concoction achieved the desired level of sweetness and dilution. 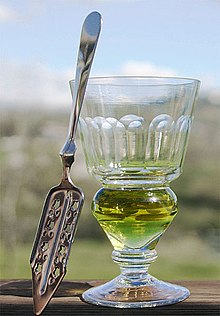 The Absinthe Room soon became perhaps the most famous bar in a city famous for bars; its signature drink, the Absinthe Frappe, became the cocktail of the day.

Ferrer’s establishment attracted an impressive list of visitors, including presidents William Howard Taft and Theodore Roosevelt, Mark Twain, Walt Whitman, Aaron Burr, William Thackeray, Jenny Lind and Oscar Wilde. In 1918, Aleister Crowley, the British magician, proclaimed: “Art is the soul of life and the Old Absinthe House is the heart and soul of the old quarter of New Orleans.”

What could be more decadent than absinthe and Champagne? Absinthe and Champagne and oysters. Pour one jigger absinthe into a Champagne glass. Add iced Champagne until it attains the proper opalescent of milkiness.  You can also pour the absinthe over a sugar cube on the slotted spoon to slowly mix into the champagne– some brands of absinthe will float for a time on the Champagne, and this makes a nifty visual effect.