Then and Now…The Armoire 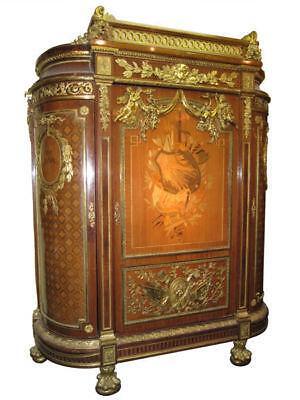 During the reign of King Louis XIV, XV and XVI, clothing of the wealthy lent itself to opulence.  Lots and lots of fabric and elaborate ways to wear it!  Women’s clothing in particular was very layered and required corsets and lace, jewelry and sometimes large wigs.  This overindulgent dress was encouraged by these three Kings!

Marie Antoinette and her husband the King of France Louis XVI sitting for portraits in yards of cloth that made up their clothing.

Women’s clothing was extravagant and stunning made of the finest laces, silks and satin….

….embellished with tiny waistlines and stiff, tight bodices allowing them to only stand – never sit when worn. France suffered from great debt during the lavish reigns of Louis XIV, Louis XV, and Louis XVI which laid the seeds for the French Revolutionary War (1789) causing changes in politics and aesthetics in France.

Formality in dress began to wear thin because of unrest in the land and the magnificence became a burden.

So evolved the Robe Volante. This style is historically significant to fashion in France.  Women could move differently. They could sit and lounge, cross their legs — even show a bit of leg. Painters started fixating on ankles and shins, showing the leg as “an object of desire”.

These dresses were still enormous and demanded space for storage.  This was the beginning of subtle changes in clothing and thought for storage. 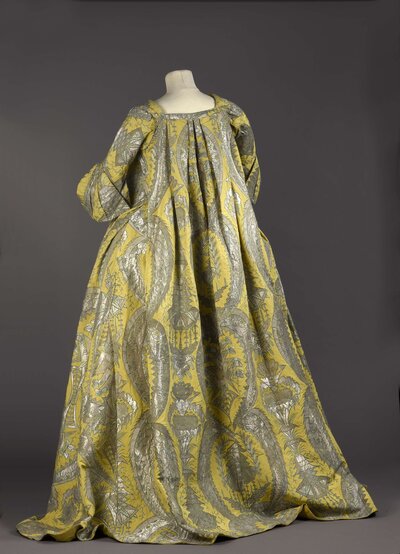 So comes the question, “How was clothing like this stored”?

One solution: The ARMOIRE

The word “armoire” is a French term that loosely describes any type of wooden cabinet with shelves. It also refers to the word “closet”.

“Closets” as we know them were non-existent in the 1800’s and kings and ladies alike needed somewhere to store their exquisite robes and expensive gowns when not in use.  European royalty had enough clothes to fill entire rooms which made “clothes rooms” very popular.  These rooms were filled with all sorts of cabinets, typically on stands, to house all of the dresses, robes, jewelry and wigs.

The elaborate clothes cabinet shown below was one that Marie Antoinette had made for her use.  So began the evolution of a cabinet to house clothing instead of chests. Eventually, these new, upright closets with hanging spaces and shelves evolved into the modern armoire.  A cabinet with doors from top to bottom.

The armoire was considered a sign of prosperity in the provinces of 17th-Century France. Although less ornate when compared to the elaborate court furniture, the country armoire typically was handsomely decorated with ornate carving and detail.

By the mid-18th Century, it was common for a household to have several armoires. Because closets were unheard of then, the armoire was an essential piece of furniture and usually was an important part of a bride`s dowry.  The piece below may have been a wedding armoire.  Hand-carved by a daughter’s father, given at a young age and filled with linens and clothes (a trousseau) to move with her once she was wed.

This exquisite piece is currently at Aubergine Antiques 251-928-0902

Our shops carry armoires more simple in nature, as well as ones elaborately carved.  Depending on where you plan to use the piece may dictate your preference.

Many people use these pieces in main living areas, bedrooms, bathrooms and in kitchens.  The armoire is quite versatile.

The piece below has wire inserted into the door and looks beautiful when books are stored inside.  This style is also used in bathrooms where one might place folded towels on the shelves.  As well, a kitchen area is an ideal spot – cleverly displaying your pottery or dishes. VERY French.

When contemplating whether or not you should purchase an armoire, remember what Louis XIV wrote:
“There is nothing that indicates more clearly the magnificence of great princes than their superb palaces and their precious furniture.”
You too can own a piece of France’s history.  Call us!
251-928-4808
CROWN AND COLONY ANTIQUES
Au Revoir!  A La Prochaine!!