Celebrating Easter in France is very much a part of the French culture, and many of the French Easter traditions directly relate back to the fact that much of the country (about ninety percent) considers itself Roman-Catholic. Whether they are truly practicing Roman Catholics or not, Easter is a major holiday celebrated by all.

The Easter-chocolate season begins weeks before the actual date. French people start celebrating it by exchanging chocolates with friends, family, and of course they do give a lot of chocolates to the children —  In Paris a traditional cake representing an Easter egg nest is prepared in many pâtisseries and when they appear in their windows we know that Easter is around the corner.

One of the most wonderful things about Easter in France is the consumption of CHOCOLATE – as you read on you will see how  traditions tie in with religious connotations of Easter.

As I, you may have thought that France is only about its wine and cheese and specialty meats — you know, like escargo!  But, the French have a very strong obsession with CHOCOLATE.  This little Chocolate Obsession reaches it peaks at Easter.  There are more than 300 chocolate (patisserie/chocolatier) shops across Paris alone. The origins of chocolate in France dates back to 1615, when France’s King Louis XIII married Anne of Austria, daughter of the Spanish king. She was the one who brought hot chocolate to the French court. So it’s now almost 400 years when chocolate is in France. The relationship French people have with Chocolate may have started with a cup of hot chocolate, but it’s one relationship that has stood the test of time.  The French today incorporate chocolate into mealtime at some point during the day and often times it starts with breakfast!  Croissants or pain au chocolate are choices high on the list – sweet breakfasts are popular in France as you would rarely, if ever, see scrambled eggs and bacon being eaten!! A tid bit is that this buttery croissant originated in 17th-Century in Vienna, Austria.  And it was Queen Marie-Antoinette, originally from Vienna, who introduced the Austrian pastry to the French Court during the 18th Century.

And while we know Marie Antoinette probably didn’t say, “Let them eat eggs”, or even “Let them eat cake”, we do know that the croissant she did eat as a comfort food that reminded her of her homeland.  That original Austrian bread has evolved into the famous French croissant as we know it today. So, celebrating Easter in France is exceptional as it comes to chocolate eating!!  For this festive time, many pâtisseries-chocolateries are performing the real art creating chocolate edible pieces in different shapes with the French traditional ones being:   Easter bunnies, 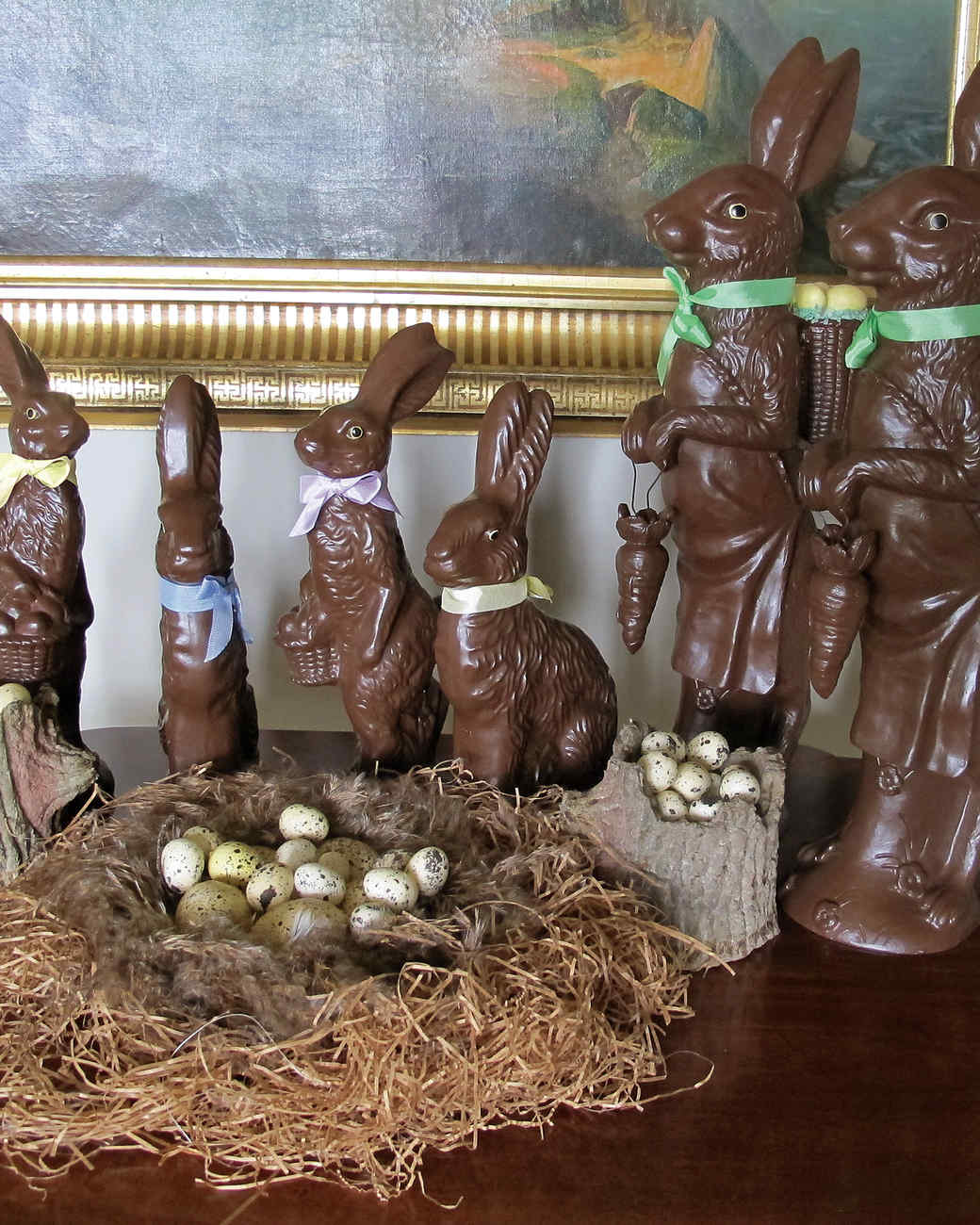 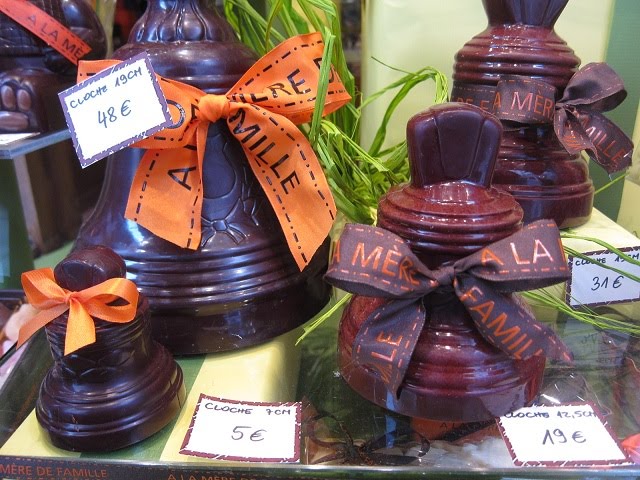 Easter Hens and little Easter Fish called “Fritures de Pâques’(those are small fish-shaped chocolates and is the symbol of Christianity). Bells and fish are unique to French Easter customs, but why are eggs?  The egg is a symbol of life and renewal close to catholic beliefs of the resurrection of Christ.   It was forbidden to eat eggs during Lent.  In French tradition the eggs are brought by the Easter Bells on their way back  from Rome. April Fools Day occurs around the time of Easter. In France, the tradition is that children play a trick on as many adults as possible by sticking paper fish onto their backs and running away. They have a great day and every time that they manage to trick a grown-up they run away shouting out “Poisson d´avrill“ which means “April fish“. The chocolate Easter bunny in France?  It starts with a tradition of Germanic and Nordic origin and was initiated in the Alsace region of France which eventually spread over the country.

Children create nests with leaves, moss or grass which they place in the garden, hoping that during the night they would be filled up with multi-coloured (and chocolate) eggs. Unlike elsewhere in France, the bells are not the chosen ones to distribute the eggs. Because of the GERMAN influence in this area, this important task is given to the Easter Hare (der Osterhase). On the night before Easter, the Easter Hare either puts the baskets filled with eggs and treats in the children’s nest or hides them somewhere in the house or garden. When they wake up on Easter morning, the children go on an exciting egg and basket hunt!

Influences from different countries well over 400 years ago have evolved within the country of France and similarities are shared here in the US.

It is again a connection that we have with France!

images for this post are from the internet/pinterest/marthastewart.com and elsewhere – they are used for informational purposes only related to this post