Did you know: The first napkin was edible?

We can thank the Spartans in Ancient Greece for that. In those days, they ate everything by hand. That led to the common use of a soft dough to clean off the fingers, a food object called apomagdalie.

It was the introduction of the fork that eliminated the wash basins and community napkins at the dinner table. With the fork at the hand the napkin no longer held its ground as an article of use, but became merely an ornament and a thing of ceremony. But, still remaining with grandeur, a part of the eating scene.

Kings and Queens would use monograms to mark their personal property and household items.

French Linens are quintessential to daily kitchen and dining life in France. Whether it is the heavy cotton and linen red striped kitchen towel or a magnificently monogrammed napkin or pillow case – LINEN’s are IN in France – Used daily and without much discernment to “keep them nice” like we do here in the US — The difference is, in France, they “use” their linens daily and typically don’t “save” anything for that special day. Everyday is considered special when it comes to linens in France!

Torchons (towels), should be laundered with mild detergent in cool water on a gentle cycle—then line-dried and ironed while still damp. All French linens should be washed on a hot to very hot wash in the machine and always hung out to dry on a line if possible. This allows the sun to naturally bleach the linens. The white linens become stark white and the linens with color become aged and wonderful. And of course, NEVER dry old towels or sheets in the dryer because it really does damage the fibers.

How to Ask for Them in French

How to prevent germs from spreading in the kitchen:

Another napkin fact: Upon completion of a dining experience, a napkin folded with a crease and placed to the left side of your place setting indicates to your host or hostess that you wish to be invited back!!

Come visit all three of our shops: Aubergine Antiques, Crown and Colony and RF Antiques for unique gift ideas imported from France – We carry French furniture as well as small items that you can carry away !

And a final note of importance – the ideal napkin wardrobe would consist of 12. 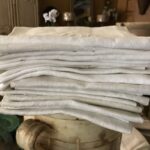 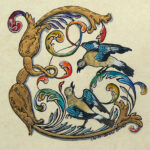 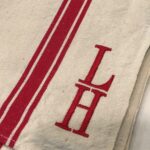