One of the most peculiar and compelling objects is a small, shallow, saucer like bowl, which sometimes has a dome shaped bottom with fluted and engraved decorations on the side — it is called a taste-vin.  It is a wine-tasting cup of French origin, an ancient tasting tool. “Taste-vin,” which is pronounced “Taht-vahN” with a nasal French ending and means”taste wine.”  These traditional wine tasting cups were carried by sommeliers (wine waiters) and were used discreetly by sellers of wine when promoting special wines to potential buyers.  Judging the quality of the wine was imperative.

Early ones appear to have not had a handle, but later ones almost always did.  This made using it a little more secure and provided a ring so it could be hung from a chain around the neck or on a belt. 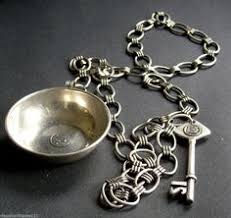 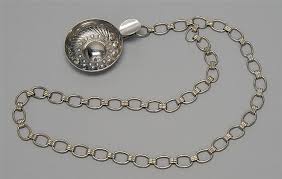 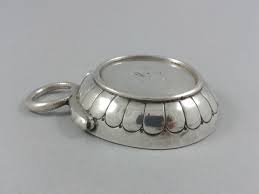 This little device originated centuries ago by cellar masters in Burgundy, France.  French winemakers from Burgundy designed the original concept in order to assess wine by candlelight.   The winemakers created the dish with a convex bottom and lots of ridges, or indentations, to capture as much light from the candles as possible. The surface of the taste-vin was  polished to make it as shiny as possible, also serving as a reflective aid. As wine classifications became more precise and geographically distinctive throughout the 19th century it became crucial to the successful buying and honest selling that one be very educated when tasting and appraising  wine. French taste-vins are somewhat plentiful. Paris, Orleans and Lyons were major centers for their fabrication and there was an abundance after 1800. 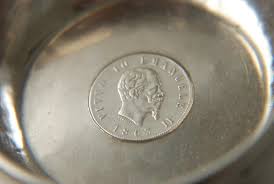 Old coins were sometimes used in the bottoms of these wine tasters as commemorations and decorations. 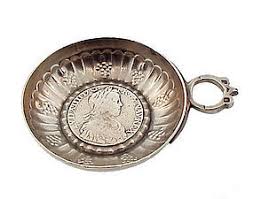 One of the most enigmatic motifs and frequent to appear on taste-vins is a loop handle formed by a coiled serpent.  The use of the serpent was a gentle nod to Dionysus, often called the God of Wine, who wound snakes around the arms during their bacchanalian parties (drunken revelry).  Snakes were symbols of youth because they shed their skin.  The classical silversmith took the snake as their emblem. 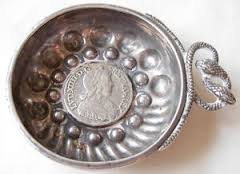 Taste-vin with Coin AND Serpent 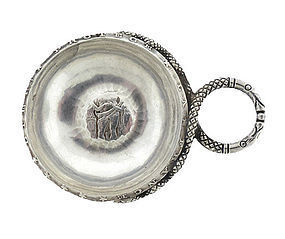 Taste-vins can be found at our French culinary shop:  Aubergine Antiques.  Please feel free to call 251-928-0902 to check availability.  Currently we have several IN STOCK.  This is an item that we enjoy purchasing when we are able to locate them on our buying trips to France.