Imari Ware and its special connection with France 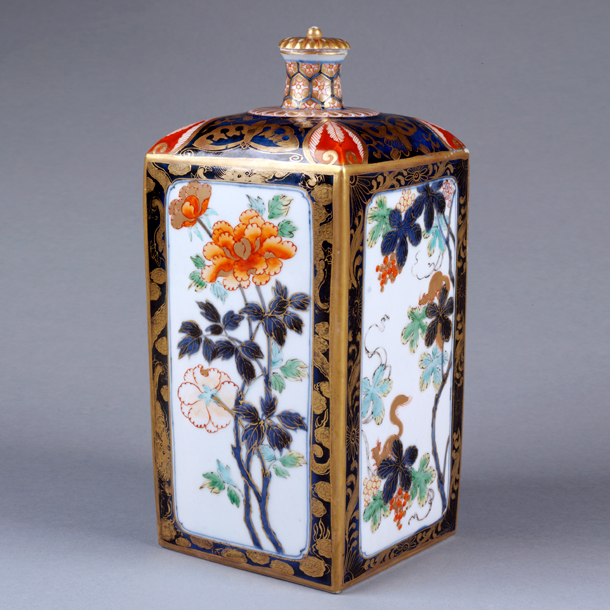 The Japanese porcelain industry was actually pioneered by Korean potters living in Japan– Many of who came to Japan during two hostile invasions of Korea.

The first porcelain made in Japan by these Korean potters is known as early Imari.  “Imari” refers to a port near the Arita kilns, from where these wares were shipped extensively to the rest of Europe.  This exportation was in full force during the second half of the 17th century and first of the 18th century. Arita porcelains in the earliest days were made in the Chinese style of the period in deep blues on white backgrounds.  By the 1640’s, bright colors and bold patterns were introduced.

While “Imari” was simply the trans-shipment port for Arita wares, it was the kilns at Arita which formed the heart of the Japanese porcelain industry.

The demand for porcelain spiked in the international market shortly after the industry had begun to develop in Japan.  It was at that time the Dutch began to encourage Japan to fill the need of the European community wanting porcelains.

The blue and white Imari porcelain and the more colorful Imari that the Dutch brought to Europe in the seventeenth and eighteenth centuries was some of the first Japanese art to which Europeans were exposed.

From 1659, Japan’s fledgling blue and white export industry flourished. However, it was Japan’s innovative, colourful wares that provoked a European frenzy in the 1680s.

During this time Louis XIV, King of France, received 1,500 pieces of porcelain from the Siamese Embassy

The Siam embassy was bringing a proposal for an alliance between France and Siam.  Can you imagine today mixing Politics and Porcelain?

Many gifts, in addition to the porcelain, were given to the King of France and in turn the Siam embassy ordered vast amounts of French products to be shipped to the Siamese court: 4,264 mirrors similar to those of the Galerie des Glaces were ordered to decorate the palace of…

Narai, The King of Siam.

Among other orders were 160 French cannons, telescopes, glasses, clocks and various velvet pieces and crystal decorative elements. They also ordered two geographical globes, inscribed in Thai by French artisans, as well as seven carpets from the Savonnerie manufactory.

King Louis XIV indulged this alliance and reciprocated the honor of these special visits by sending his own embassy to Siam in 1685.  He did this to not only further commercial relations with  Siam, but to engage in a scientific expedition of Africa, the Indies, and China. Below are original pictures of the expedition, compliments of Harvard University:

King Narai on his elephant

The voyage to Siam

It is amazing how the trade of simple Imari ware porcelain played a part in opening doors to the East for the beginning of new world trade relationships!

(“in imitation of the porcelain of Japan”). The Japanese Kakiemon style of Arita porcelain, Japan, known as “Fleurs Indiennes” (“Flowers of the Indies”) (below) was also used as inspiration as the French European production of Imari style porcelain got underway. After this initial period, up to the end of the 18th century, French porcelain manufacturers would progressively abandon their Japanese designs, to become more French in character, so in oversight this began …the French Porcelain production, such as Limoges porcelain and the evolutionary journey from blue on white to various colors indicative to Imari Ware most seen today, but often times embellished with French effects such as ormolu. We invite you to visit our Imari Room at Crown and Colony Antiques where we house a generous supply of Imari Ware — plates, vases, chargers and other novelty pieces coveted by collectors.

If you are unable to come in for a visit, you can view our Imari online at crownandcolony.com  Call us if you need assistance 251-928-4808

Credits to:  Anna Willmann for some content used in this post
Department of Asian Art, The Metropolitan Museum of Art * most pictures are of our own collection of Imari, but some, used only to educate, are from other sources