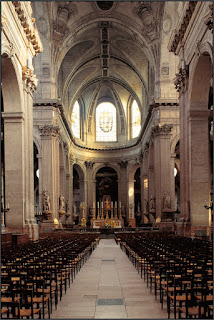 Scenes from the DaVinci Code were filmed in St. Sulpice.  It’s a beautiful church that has huge matching genuine clamshell holy water fonts at the entrance. It contains 2 huge paintings by Eugene Delecroix who helped with its restoration, and it has one of the world’s greatest organs (as we found out from a fellow tourist and organ player who came just to see it).

As we learned in the DaVinci Code — St. Sulpice contains the meridian line, a narrow brass strip that begins near the middle of the nave on the right side, near a stone statue with a Latin inscription and runs north across the nave and transept to an obelisk next to the statue of St. Peter. The meridian line is a fascinating astronomical instrument of the 18th century, used to study the planets and determine the date of Easter each year. The sun’s rays enter the church through a small opening in the south transept and rest on the line at various points throughout the year. 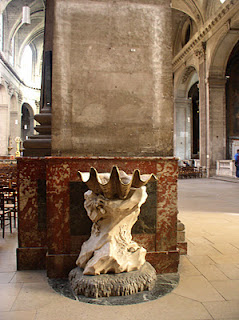 Saint-Sulpice is one of the poshest quartiers in Paris. With neighbors that include Catherine Deneuve and Scarlett Johansson, it is the regular haunt of celebrities, writers, and intellectuals, making it the cultural capital of the city. The area is named for the nearly 400-year-old church and its soaring bell towers, declaring both the geographical and social center of the arrondissement. A stately square spills from the church steps, lions guarding the central fountain. After school children come to play kick ball, practice tricycle, and engage in all the sports that are forbidden in the nearby Luxembourg Gardens. Gourmands from across the globe fill the green park benches, savoring delicacies from the area’s pâtisseries extraordinaires: Pierre Hermé and Gerard Mulot. In the winter, there is a free merry-go-round for young children on the square, while in the summer the Foire Saint-Germain sets up stalls to celebrate poetry, math, ceramics, and antiques. And there are other festivals around crafts, volunteering, and jazz throughout the year.