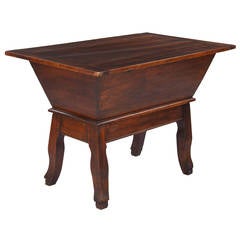 The French knew plenty about cooking with style even in the old days. At the heart of any kitchen in Provence stood a petrin and over it hung a panetiere. Bread dough was placed in the petrin for rising, then removed and kneaded on top. The bread baked in the fireplace, then was stored in the panetiere — a very fancy breadbox. The panetiere hung on the wall to keep rodents and other furry creatures away from its tasty contents. Today, you can use the petrin and the panetiere alone or together wherever you need decorative storage. 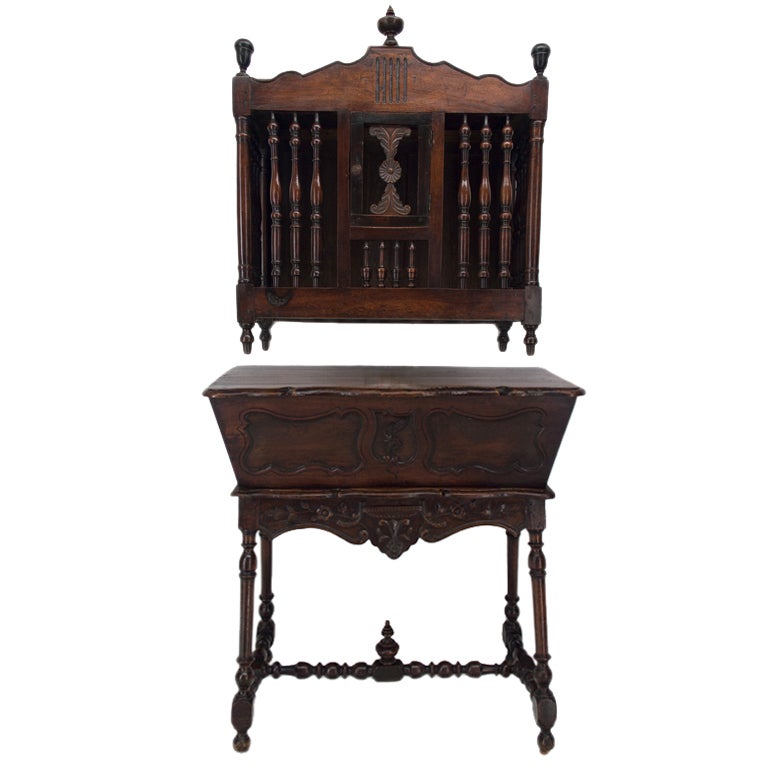 The panetiere, or breadbox, is considered a highly collectible French antique and represents a celebrated symbol of Country French tradition~ the making of bread.  Bread has been one of Europe’s staples for centuries, and over the course of time the French elevated the daily task and ritual of bread-making to an art form. 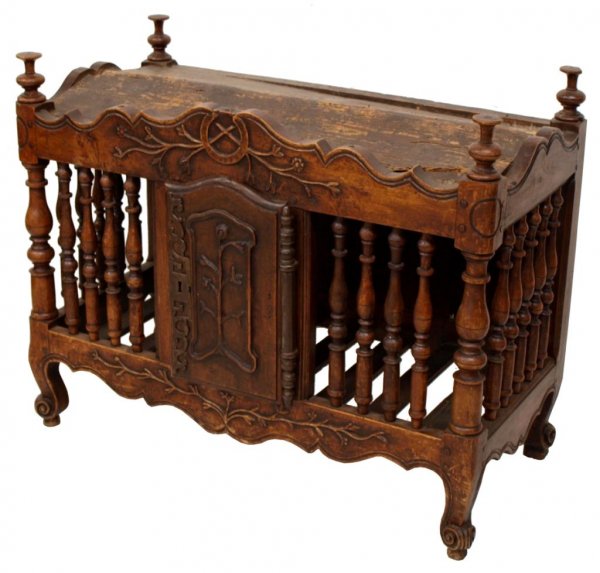 The time-consuming process of making bread in the French home kitchens was typically repeated two or three times a week.  The panetiere evolved to provide a safe haven for the hard work by the bread makers in the family.  These “boxes” appeared in the Southern part of France during the 18th century; most notably in Provence.  After World War I the panetiere made its way into other areas of France. Panetieres were usually hung on the wall.  Originally the panetiere was simply a wooden box, perforated and placed directly on the table.  In the 18th century, turned wood spindles and more decorative aprons and cornices began to appear, replacing coarse wood panels.  Also during this time the addition of small doors and locks were added to further secure the perishable treasure — like patisseries (pastries) and pain (bread).

In the 19th century Provence led the way~ in making the panetiere even more elaborate.  The region began adding turned spindles to create the case, with corner posts topped in acorn-shaped finials.  These finials took many other forms, and were described as candeliers.  In the region around Avignon it was common to use fletching motifs designed to resemble bird feathers, while further south near the coast around Arles, bobeches were common adornments.  Talented sculptors began to add more motifs glorifying the country life, including ears of corn, pecking birds, fruit clusters, and other motifs based on the leaves and flowers of local plants.

Below is a nice example of how the panetiere can also be used in conjunction with other pieces of furniture for function and beauty. 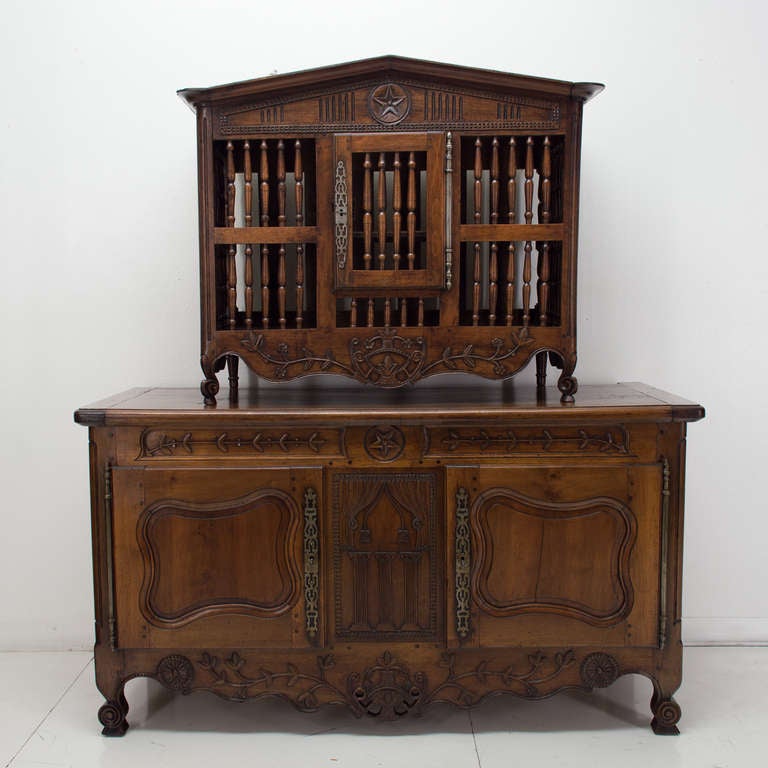 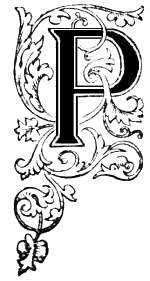 Petrin is pronounced p TRAn (with the N being kind of softly spoken).

The Petrin dough table or kneading trough was sometimes called a dough trough or box which typically had angled sides and sat upon legs.  This petrin from Aubergine Antiques (251-928-0902) is a perfect example.  The front drops on this petrin where some have a top that lifts.

This French bread dough trough was a typical sight in the kitchens of France. Dough for bread and pastry was kept in the box for storage until ready for use. Once ready, the dough would be taken out by lifting or lowering the lid, kneaded on top and then placed back inside the trough or box to rise more. Several batches of dough would be kept inside the petrin at any given time. This back and forth was part of the process of making breads and desserts. 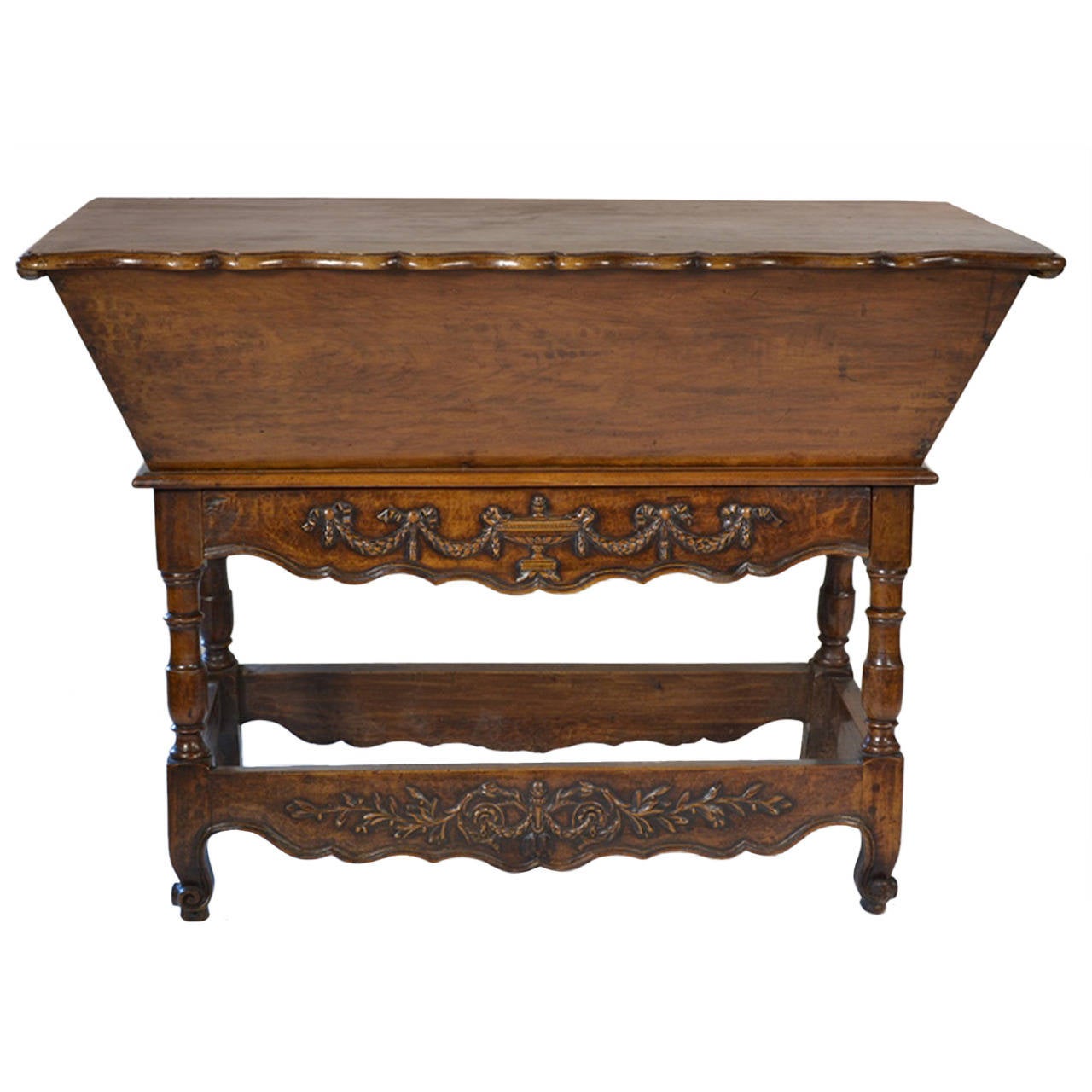 The petrin below is also available at Aubergine Antiques – This particular petrin has a top that lifts.  The lid was good for keeping in the warmth, and it protected the dough from mice, ash, or anything that might compromise the dough: especially useful if the dough was left to rise a long time. Overnight was not unusual. Slow rising generally improved flavour and texture.  It could take several rounds of kneading and  leaving the dough to rise before the bread was ready to bake.

The Petrine can also be placed in the home for other uses other than to knead bread.  Here the petrin is used as a table for display.  You can use this type furniture also as a kitchen island or as a desk.

A third generation bakery in France, Poilane,  still uses the dough troughs daily.  This one shown in use is not antique, but still serves the purpose and is made in accordance to the originals. 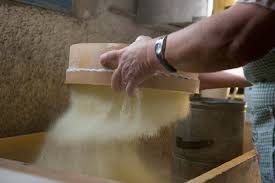 The dough has been mixed and kneaded and is left to rise.

The end result is beautiful breads, baguettes and pastries to either eat right away or store in the panetiere!