What we Americans typically associate with Christmas might be a creche and the beloved Nativity Scene — in France, in particularly Provence, there is the Nativity along with other Santons and the creche (from Old French cresche “crib, manger, stall,”).  In France, just like in North America the creche is a model or tableau representing the scene of Jesus Christ’s birth, displayed in homes or public places at Christmas.

The origins of the santons of Provence can be traced back to the French Revolution, circa 1789. With the Revolution, churches became “property of the French state” and, in 1793, the national assembly decided to close all of the churches.   Nativity scenes were banished and forbidden.  One would look at the blade of the guillotine if found with a nativity set or found making one.

As events in history preclude a tradition or how it initiates a new tradition, it will often times fall short all together OR as the old and new merge the tradition will manifest more strong and vibrant – even still today.  This is evident in the Nativity and non-religious Santons.  Unknowingly the “diminutive” santon became a child of the French Revolution and it’s worth noting that santons were also a way of preserving religion.

In the picture below if you look closely you can see an angel and wise men as well as people of this French village celebrating the birth of Christ. The people, who were profoundly religious, were used to going to church to see the Christmas crèche. No longer able to do this because the churches were closed, they started making the crèche at home, in hiding since it was forbidden.

Santons are small hand-painted terracotta nativity scene figurines and were first produced in the Provence region of southeastern France. In a traditional Provençal crèche, there are 55 individual figures representing various characters from Provençal village life such as the scissors grinder, the fishwife, the blind man, and the chestnut seller – etc…

A maker of santons is a santonnier, and the creation of santons today is essentially a family craft, handed down from parents to children.  But these small and easily hid figurines were first made by Louis Lagnel in 1798.  He designed the first plaster moulds to make his santons. This new technology made mass production and wide distribution possible. These “penny santons” finally allowed everyone to own their own crèche. 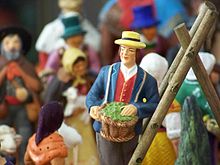 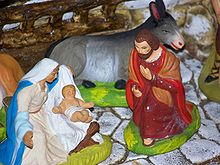 A few of the most loved santonniers are:

As the French Revolution imposed sanctions on religious practices, the making of santons allowed the people to celebrate the daily life of a French village – celebrating all who contribute to make the village vibrant.  These clay made representations of people and the village was a way to combine the sacred Nativity with everyday Provencal life. 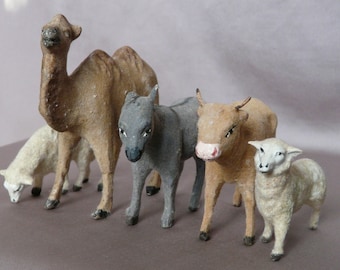 The French people, in particularly in Provence, begin arranging and displaying their creches with figurines in mid-November…

In Provence,  December 4, is the beginning of Calendale.  This word comes from the Provençal word Calèndo meaning Christmas!

The Pagnol (figures that represent everyday life) characters at some point are completely removed OR merged with the traditional figures of the Nativity story.  The Christmas celebration ends on February 2 upon the feast of la Chandeleur (candle mass).

These little village scenes are so charming and are elevated in importance when the Blessed Nativity is added.

Our architectural / garden antiques shop, RF Antiques,  carries the nativity and have them in stock prior to Christmas.  Come visit us if you need to add this element to your Christmas festivities.

The nativity scene below has been cleverly displayed in a French wine crate with pine straw.

The pictures in this post are our own or borrowed from other informational sources in an effort to educate our readers through visual aspects regarding Christmas traditions in France.