The writing slope is a wood box with an angled surface, elevated a couple of inches above the desk or table, slanted and padded with either felt or leather.

Writing boxes were originally referred to as desks, as they were the only form of furniture for holding writing requisites and for writing on. From the end of the 18th, to the end of the 19th century, the writing box or slope was featured prominently on military expeditions, travels, libraries and in drawing rooms. Great literature as well as dispatches, contracts, letters and postcards were written on its sloping surface. Through it both business and personal activity were transacted. Unlike the writing desk or table it was a personal and not a household possession.  Below you can see what might be considered an english military box due to the brassing at the corners and on the surround — & the typical slope when it is opened for ease of writing.

The increased popularity of the writing box by the end of the century can be attributed to two main reasons. The onset of the Napoleonic wars and the popularity of traveling. Officers in the army had their own boxes, using them both for army business and for writing home. Both of these writing slopes are French.  One is with an attached letter box! (both from Rubylane.com) – The inside of some of the French boxes were quite luxurious. A rare ecritoire from 1855 – French – with ink wells, a slot for writing utensils and a drawer.  The lid lifts for papers. This may have set on a desk as the writing slopes evolved into adornments for the writing table/desk. Antique lap desks had hinged writing surfaces, often covered in leather, felt, or other material, that flip up to reveal storage space for papers. Individual compartments were designed to hold inkwells, pens, sealing wax, and other contemporary writing materials. Some desks also had concealed storage compartments.

Note the unbroken crystal ink wells in this box…. 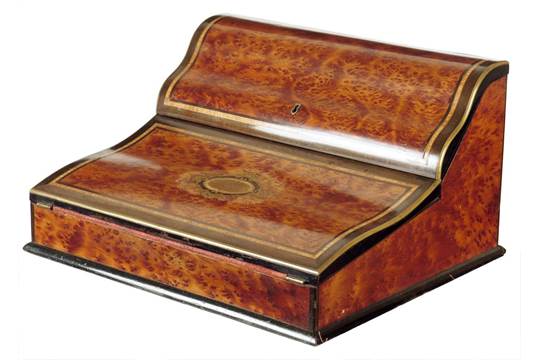 A French writing slope does look different than it’s English counterpart.  The English boxes are “boxy” in look with brass adornment at times at the corners and often look more military.  The French writing slope has a bit more flow, elegance and sophistication — almost formal in look — than that of the English slope. 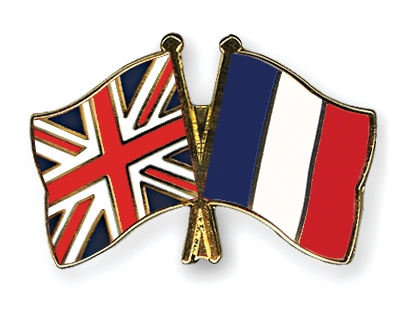 An English box with marquetry was probably a commissioned box.  There were many variations of the basic design with special commissioned boxes taking care of specific personal preferences and needs.

Another English Box that is tri-fold in nature.

Traveling during this time (1800’s) was often from France to Italy, making it necessary for a writing box.  Traveling was planned and undertaken as a very serious passage to adult life.  Young boys in particular welcomed the voyage of discovery and on these travels they would write and sketch about their trips. People however, seldom traveled alone.  There were whole entourages, moving along slowly with luggage filled to cover any need while on the journey.  The writing slope was an integral part of this travel adventure.

The need for a personal space for keeping papers and letters and the desire to have a wonderful box to keep them in continued throughout the 19th C.  and that held true for the FRENCH & the ENGLISH…

Even today, many people still own an old portable writing desk or know someone who does. Although portable writing desks have existed in Europe (& America) since the sixteenth century, the majority of those found nowadays date from the Victorian period.  These writing slopes, because of demand were made in great numbers — mostly due to the rapidly increasing middle classes.

These small pieces of furniture are largely ignored as antiques, perhaps because they are so numerous and because the quality of the later ones is often poor. However they vary tremendously in size and decoration and it is rare to find two that are identical.   The book Portable Writing Desks by David Harris takes a peek at the significant history of these charming “desks” and has nice illustrations of the main types to be found.

Crown and Colony carries many styles, sizes and offers a nice price point for these traveling “desks”.  As well,  if you are looking for a writing desk that is larger in scale with character and charm – We currently have a drop front desk in a beautiful empire style and in the Louis Philippe style.  These furniture pieces add charm to the public living area as well as the boudoir.   Come visit us in person or view these items on our website located under the headings BOXES & TEACADDIES for the small boxes and COMMODES & CHESTS for our larger writing desks,  https://www.crownandcolony.com

French pictures of writing slopes etc. were found on Rubylane.com and omgthatartifact.tublr.com  — All of the english writing slopes are found at Crown and Colony